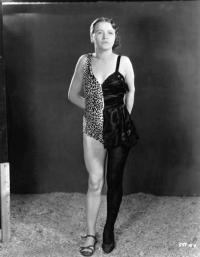 "No category of Freaks is... regarded with such ferocious ambivalence as the Hermaphrodites, for none creates in us a greater tension between physical repulsion and spiritual attraction." -- Leslie Fiedler, Freaks: Myths and Images of the Secret Self, 1978.

"Half-Man, Half-Woman” acts, known in the business as Half-and-Halfs, were popular (and lucrative) from Barnum’s time until the early-1970’s. These performers were billed variously as "Sexual Enigmas," as "Hermaphrodites," and "Morphodites." They were more often than not shown in the blow-off.

As cross-over performers CIS-gendered male half-and-halfs also sometimes performed as "female impersonators" in club acts either in the winter season or as an alternative to the carnival sideshow life.

In reality these performers were the sideshow's best actors. These men and women played a role that blurred the lines between reality and fantasy, confused the marks, and made the mysteries of sex seem alternatively grand, garish, strange, and frightening. They exploited confusion and titilation among a less educated audience in simpler times, often appealing to hidden and unawakened sexual desires of a more inhibited public.

The Half-and-Half limned the edges of hetero and homo, cisgendered and other gendered, in a time when the attributes of sex appeared less fluid. Those who performed the role of the Half-And-Half in the sideshow were often literally cross-dressing— wearing men’s clothes on one side of the body, and a women’s on the other.

Standard elements of the split-personalty wardrobe gimmick included wearing a man's brogan shoe (often with a sock and sock garter), on one foot attached to a hairy leg, while the female side sported a smooth-shaven leg and a dainty pump. Some acts built up a muscled arm on the male side, and kept the other arm shaved and wearing bangles, rings and bracelets. Some Half-and-Half's could be seen wearing makeup on the female side of her face and displaying coifed and styled hair, while on the male side of the face, if she were able, she might have a stubbled cheek and chin. The female breast was very often seen on one side more prominent than the other-- this accomplished with falsies or even saline injections. Anything to extend the illusion that nature was able to split the body lengthwise by gender. Remarkably, this "split down the middle" sexual demarcation was nearly universal among Half-and-Half acts, despite the ridiculousness of drawing a line between right and left sides of the body.

Sometimes, but not often, Half-and-Halfs were transgendered persons, or more frequently cisgendered men playing dress-up, or rarely, real hermaphrodites. Though rarest were the women transvestites performing as both a man and a woman. All of them were ahead of their time, as the freedom to flaunt ones "other than heterosexuality" in public-- whether an "act" or not-- wasn't something the average American could see in any other venue.

Whether fully out, or fully in, the Half-and-Half role they played in the sideshow was nearly always a partial truth, an exaggerated reflection. Yet behind the scenes, once the marks left the lots, protected within the insular world of the shows, many were able to live a relatively judgment-free and open lifestyle that could not be found in the places they’d come from, nor the places they would go to if they left the business.