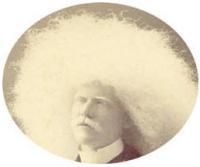 In the world of the 19th and 20th Century sideshow, those who lacked pigment in their skin appeared exotic to a public that saw human beings as primarily black or white, yellow, brown or red. Albinos are none of the above. They had the ability to amaze by virtue of their manufactured resemblance to a new race, and were billed as such by promoters like P.T. Barnum.

Albinism is an inherited condition characterized by the complete or partial absence of pigment in the skin, hair and eyes due to absence of tyrosinase, a copper-containing enzyme involved in the production of melon.

Incredibly and tragically, in a 21st Century twist, in African countries like Tanzania and Burundi, there has been an unprecedented rise in witchcraft-related killings of albino people because their body parts are used in potions sold by witchdoctors. National Geographic reported that in Tanzania a complete set of albino body parts is worth $75,000.