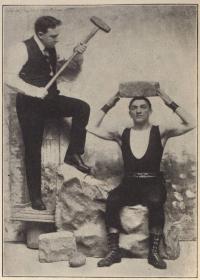 The act is getting hit on the head with a sledgehammer while holding a big rock to soften the blow?

Today we'd likely see this act a little less amusing than audiences in the late-19th and early-20th-Century.

Not a fun day at the circus when you think that presented for your entertainment is a man whose act is an obvious precursor to traumatic brain injury, and possibly leading to Chronic Traumatic Encephalopathy (CTE). CTE is a progressive brain condition that's thought to be caused by repeated blows to the head and repeated episodes of concussion. Ultimately CTE causes memory and cognitive issues such as dementia, Alzheimer’s, and depression.