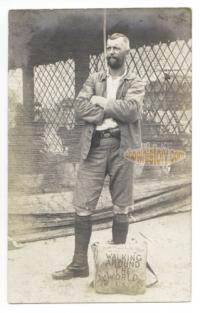 From perhaps 1900 to the mid-1940's many hundreds of hard-traveling performers sold their act literally "on the road." Long-Distance Travelers sometimes were termed Globetrotters when their perambulations spanned countries or continents

Most akin to the freak performers that sold glimpses of themselves as outsiders, the Long-Distance traveler was an act that had only itself as show.

Whether on foot or other conveyance, they appeared mostly unannounced passing through small towns across the USA (and virtually every other country), as ephemeral celebrities who made their living by selling postcards, pitch books, and souvenirs, and sometimes giving lectures about their travels.

Their exploits today are (mostly) lost to history, but their stories can be found on postcards and pitch cards they sold to the curious public that met them on their thousand stops along the journey towards the next place. Many professed poverty, several boasted of their Herculean frugalness in getting from point A to point B on small change, charity or the hard work— the performance art— of traveling.

This later-day "pedestrianism" was simply a now-vanished way to make a living through the novelty of vast perambulations, the travelers' purposeful or unintended eccentricities, obvious physical disabilities, or even as sidelight, to publicize or promote some product other than themselves which they endorsed as they rode, walked, biked, skated, barreled, etc., out of sight.

An excellent website devoted to "Globetrotters" by Claudio S. (Italy) and
John W. (USA) can be found here: http://xoomer.virgilio.it/globetrotters/index.htm

HERE IS AN INCOMPLETE LIST OF THOSE WHO WILL BE FEATURED HERE:

Colonial Jack "9000 Mile Walk Around The Border of America Pushing A Wheelbarrow" John Albert Krohn, aka "Colonial Jack", uniquely followed the coastal outline on the United States 1908-1910, writing and publishing a 98 page week-by-week journal/pamphlet about his trip.[d]

Max Duffek "Round The World, First Roller-Skater On Hands" 1907, Starting in Berlin(?) "In a Million different ways" [d]

"The Mystery Ship" "America's Greatest Travel House" Traveled every state in US and Canada in weird boat-shaped car with monkey. [d]

Richard E. New "Legless Motor Cycle Rider" Mr. New claims to have fallen "1,800 feet from a balloon" losing the sight in one eye, breaking his back in two places, and "crushed his feet and legs so badly, that both legs had to be amputated". Advertising Goodrich Tires, Mr. New was on a 100,000 mile trip "covering the worst trails in the country" circa 1915-20. Began in Akron, OH[?]. [d]

Mr. & Mrs. J.A. Personett "Coast to Coast, Every State" From Salem, OR "For an education and record" with dog pushing homemade perambulator, circa 1905-07. [d]

Roady Bill & Tony "Famous Pony 39,200 Miles Over Land" Left NY 1928 with dog in "Pioneer Covered Wagon" for San Francisco, Mexico Canada, Europe and Africa "The only pony in the world that ever made this trip" [d]

Gottfried Rodrigues "Around The World On A Wager" Left Amsterdam, Holland 1909 without money or luggage, toured Europe, USA, Japan, China, Siberia, Russia and then back to Holland. "I can travel anyway except by train." Rode and advertised the M.M. Motorcycle, American Motor Co. while on USA portion. [d]

Unidentified, Man Pulling his wife in a wagon "Around The World" [d]