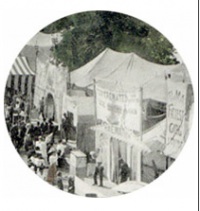 The traveling carnival in America has been the premier form of outdoor amusement since the late-19th century. The substance and layout of the carnival has little changed since its earliest incarnation at The Chicago World's Fair of 1893. More properly known as The Columbian Exposition, this fair at the end of the 19th Century featured on its "Midway Plaisance" many iconic shows, rides, food, and midway games that are still in evidence today.

Until just after World War II, carnivals consisted mostly of shows-- sideshows, freak shows, animal shows, girl shows, minstrel shows, thrill shows, illusion shows, crime shows, geek shows, athletic shows, religious shows, drug shows, etc. etc. If it had the word "show" in it, then you can be assured it travelled at least for a season or two with a carnival.

Venues of this type