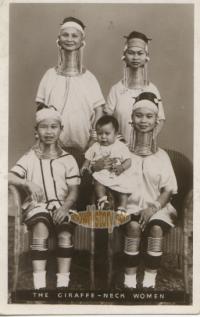 From the importation of ethnic peoples from all over the world beginning with Barnum to the shockingly recent "Savage Africa" shows that continued up through the early 1960s, the "ethnic curiosity" is a show business archetype that has had a very long history. Whether we see the presentation and exhibit of Sara Baartman "The Hottentot Venus" as racism or just cultural ignorance, the truth is that we once saw-- and perhaps still see-- freakery in those who live in faraway lands, or whose body types and/or dress are different than our own. What was once called "Exotic Humanity On Display" would today be seen as a human zoo-- not politically correct, nor in any shape or form allowed to pass as entertainment.

Among the wonders brought to the United States and Europe for our western curiosity have been acts like the "Ubangis Savages," Burmese woman billed as "Giraffe Neck Women," Esquimos, "Dog-Eating Igorotes" from the Philippines, African Bushmen, African Pygmies, Egyptians "From The Streets of Cairo," Fiji Islanders, Turkish and Algerian "Whirling Dervishes," "High Caste Hindoos," "Afghan Warriors," Grass-Skirted Hawaiian Bands, "The Bayrooty Troupe" from Syria, and Chinese women with bound feet.

Closer to home in America, yet somehow farther away in our understanding, our own Native Americans worked Wild West shows, Medicine Shows, and exhibited their "native exoticism" from the earliest 19th-Century circuses up until the 1950's.