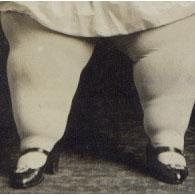 Professional Fat Folk of an earlier age lived to astound a public for whom not having enough to eat was a real possibility, and even a commonplace.

From the 18th Century to the beginning of the 20th Century being fat was a sign of health and prosperity.

Seemingly devouring a constant plentitude of food that their audiences may not have had, the showbiz of girth and jiggle was a universal attraction in carnival sideshows, dime museums and circuses.

Today Morbid Obesity is considered a disease, very much a phenomenon of the western world, and yet as American as apple pie washed down with a six-pack of Pepsi Cola.